You may remember my articles about the adopted waif, Rio the Pastor Vasco. He stayed with me for a while whilst his owners visited France to find a new home.

Certainly the need to allow a dog freedom to socialise does cause us all some concern, but moving house or even to another country can create more problems for our pets.

So reading Susan Draymans experience with Rio, may strike a few cords with you.

The move from Spain to France with Rio, our big, fluffy Basque sheepdog aged 16 months.

We went to see the new house, this time with Rio. Its a large 200-year-old converted stone barn, complete with bread oven and all mod cons, set in an acre of beautiful gardens and surrounded by fields of poppies. Rio walks in and decides to have a wander around. We thought he should stay near us in the sejour - a large sitting room-cum-dining room - but the proprietors, John and Renata said Oh, isnt he absolutely lovely - do let him explore, we do love dogs so much. So we didand he went upstairs andoh goodness gracious me - he did a big number two on their new white fluffy bedroom rug. Was he saying, "Yes, I like this house so Ive left my mark, or "no, I dont like it here"? There were two dogs staying while their gite-running owners were on holiday and of course, the very sociable Rio wanted to play with them outside. In Spain, Rio was always in an enclosed garden, but here in France the gardens are open to the countryside. Off he went to play, ran straight off past the two dogs down the garden path  out across the lane and to the fields beyond and didnt come back. We carried on talking with the owners of the house who were getting more and more worried about Rios whereabouts. I tried to stay cool and calm as a cool, calm cucumber saying Im sure hell return, he doesnt like to be away from us for long, with my fingers crossed behind my back and my nose growing longer by the minute, remembering that it was the French hunting season and Rio could be mistaken for a - what? A big beige fluffy thing? I didnt want any angry farmers coming out with a shotgun if hes enjoying playing hopscotch with the sheep. John, the house owner couldnt stand it any longer and went out to look for him .and returned alone, Rio nowhere to be seen. Everyone breathed a big sigh of relief when he came back, looking so proud of himself and extremely thirsty, although his two new friends didnt let him near the water bowl until theyd had their fill. How polite our dog is, waiting so patiently. I wonder if we should get another dog when we move in? A playmate for Rio would be nice. It might even keep him at home. 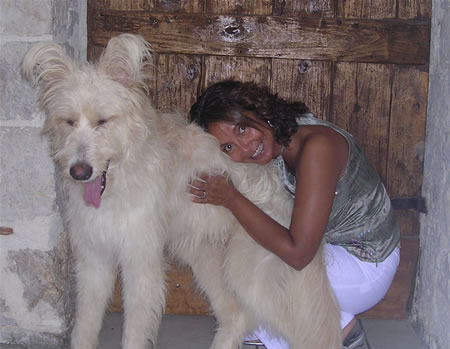 The big day has arrived and our kind, friendly neighbours came in to help pack and see us off. The car journey has begun and Rio is sitting safely harnessed in the back of the car. Hes a big boy and leans his fluffy head forwards to place his chin on my arm until it goes to sleep - my arm, not the dog. Looking at his soft brown eyes gazing up at me sends me off to sleep, too. I hope Phil stays awake - hes driving. We have a long journey to make, so its just as well Rios a good boy, travels well and is never sick or naughty. We stop overnight in Sitges, a resort just outside Barcelona, where we find a hotel who take kindly to dogs, even large ones like Rio. People stop in the street and stare as we enter the hotel with this big shire horse of a dog. No one believes that hes still a baby and not yet fully-grown. Children flock round to stroke him, we cause a traffic jam in the hotel foyer, and Rio adores all the attention. We look at the room, Rio sniffs all the corners to see whos been there before him and off we go out to look for a restaurant where dogs are accepted, and surprise surprise, being Spain, cant find one. We find somewhere to eat sitting outside and hope that all the passing horses dont cause Rio to pretend hes a horse toobut, yes, he does his unique horse impression, rising up on his hind legs, every time any dog passes by, so we eat as fast as possible, holding the table down coz Rios squirming under it and leave to stretch our legs along the seafront then return to our hotel room ready for our beds.

On our arrival in our chosen village of Mauroux, we stay in a gite for a few nights while the Notaire finishes off the house sale/purchase documents. Living there are the two dogs that Rio met before plus another one. Rio jumps out of the car to greet them but the proprietor of the gite doesnt like any dogs playing with hers for some reason, even though I tell her theyve already met. Rio is disappointed and follows us with a slow sagging gait to our gite and we put our cases inside. Hes unable to decide where he wants to sleep as weve forgotten to bring his bed. We put down various rugs for him but while Im in the shower, hes made the decision that my bed is the most comfortable place to sleep. He looks at me so accusingly as I make him get onto the floor. I dont believe animals should sleep on our beds, with the exception of my husband, of course; how else would I keep warm? The next day we put Rio onto a long chain outside so he can get fresh air without gallivanting across France and back to Spain. He sees something run across the garden and runs towards it, the harness holding him on the chain breaking completely and off he goes, running wildly away. Not again.

We go to see the new house once more; in France you sign the papers saying that you accept the house as seen just like you do with a used car in the UK, checking that no ones removed the electric sockets - in France they often remove anything that is removable, leaving you with bare wires for the dog/mice/cat/passing wild boar to chew on. Rio loves his new garden and digs up a big old bone, brings it to show me and as Renata bends towards him he starts to growl and bare his teeth. I realise hes doing his old guarding trick again so think Id better take it off him to show whos boss. The big nip on my arm really shows me whos boss. Hmm, some more training needs to be done in that department, so Id better get hold of those gloves from Alan again.